We awoke to yet another fine day. The campsite was alive with movement as the DOE youngsters and their ‘handlers’ readied themselves for another day in the hills. We packed up and were soon away, although the main road through the village resembled a busy high street with all of the activity as the groups of youngsters headed out, it wasn’t long before we were alone again as we climbed the track out of the village on our way to Hawes. This section I knew was quite straightforward and easy, as it largely follows broad tracks that ascend easily onto open moorland. Alan seemed to be in better form and we were in a relaxed mood as we enjoyed the views across the dales and headed towards Ling Gill Nature Reserve. As we approached the reserve, we could see Gordon and Rowan sitting on the banks of Ling Gill Beck brewing tea and we stopped and joined them for a break. The midges were out in numbers, and we were never really able to relax as we had to constantly brush them away from our faces and Alan and myself were soon on our way again.
As we approached the Cam High Road, the countryside opened out around us and we enjoyed good views to the Ribblehead viaduct in the valley below. This viaduct is a scheduled ancient monument and was constructed between 1870 and 1874 by Midland Railway using a thousand navvies who established shanty towns for themselves and their families on the moors. They named the towns after Crimean war victories, well-to-do areas of London and biblical names. Around 100 navvies were killed during the construction of the viaduct, which now forms part of the scenic Settle to Carlisle railway. The viaduct comprises 24 arches and and is over 100 feet high at it’s highest point. Although I don’t usually like to see man-made constructions in remote natural settings such as this, I had to admit that the viaduct had a graceful beauty that fitted in well with the general surroundings. The Cam High Road made a ninety degree right turn at Cam End away from the viaduct and soon we were walking along it’s wide, stony surface, which in the past was used by the Romans, drovers and packhorse carts. Now, apart from it’s use as a route for the Pennine and Dales Way long distance walks, it is also used for more mundane purposes and at one point, we had to make way for a logging lorry as it bounced past us on it’s way to the forest in the valley below, where we could see much evidence of tree harvesting. 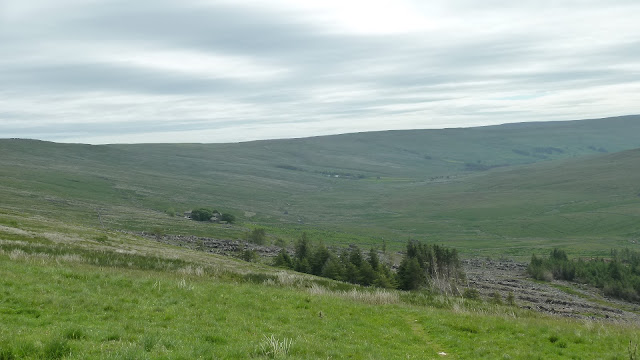 As we continued along the track, we could see a walker approaching us from a distance along a deserted tarmac lane, which he eventually left to join up with our route. We stopped for a chat and while we were talking, I noticed that he was wearing lightweight trail shoes and I had a discussion with him about the benefits of walking in them as opposed to heavier, leather boots. He said that, although the trail shoes wore out fairly quickly, he would never consider returning to wearing boots again as the comfort and light weight of the shoes made walking so much more enjoyable. I had to agree as I had now been walking for a week in my trail running shoes and had suffered no foot problems at all and found them extremely comfortable. After a short walk on tarmac,we turned off onto the West Cam Road, which contoured high above the Snaizeholme Valley, a picturesque scoop in the landscape decorated with forest on it's slopes and one or two farms that punctuated the valley floor where we saw and heard a shepherd on a quad-bike calling to his dog as he herded sheep. I had particularly enjoyed this section the previous year, despite the conditions being somewhat hazy and it proved to be just as enjoyable a march below the summit of Dodd Fell as it had the year before. Just before Rottenstone Hill, we left the West Cam Road and followed an intermittent grassy path down the hillside as Hawes came into view across the grassy meadows in the distance. 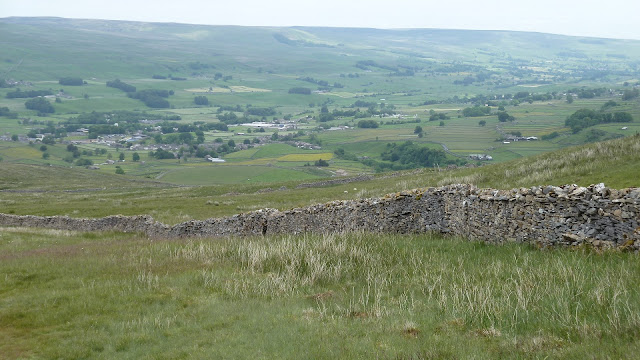 Although the distance of the day’s walk was 14 miles the walking was straightforward and easy, which meant that we were going to be finished just after midday, so we decided to head into Hawes centre for lunch before booking into the campsite. We reached the hamlet of Gayle on the outskirts of the town and crossed fields before finding ourselves deposited in the bustling high street, where we found a table outside one of the pubs and sat enjoying lunch surrounding by a throng of tourists out enjoying the pleasant weather. The campsite was a mile or so from the centre of town and after we had checked in, we enjoyed a pleasant afternoon relaxing in the sunshine after we had attended to chores. Later in the afternoon, Gordon and Rowan arrived and pitched in the far corner of the site and I went over to have a chat with them. I had gained the impression that they were on a fairly tight budget as they were rarely in the pub in the evening, preferring instead to cook outside their tent. As the sun set over the hill behind the campsite, we headed back into town where we had dinner in a pub before returning back to the campsite via a slightly shorter route we had discovered across a field.