We set off from Keld and climbed into the mist across Stonesdale Moor, an area that didn’t meet with Alan’s approval, before eventually arriving at the Tan Hill Inn, where we were greeted by Rowan and Gordon who had taken a room for the night in the pub and were standing out on the pub's terrace drinking tea. We stopped and had a chat while watching a lone walker setting off from the pub along a moorland road that paralleled the Pennine Way. According to Gordon and Rowan, the walker was following the Pennine Way but had been frightened off of following it across Sleightholme Moor by someone in the pub who had told him a story of a young girl walker falling into a sinkhole that had opened up in the path. 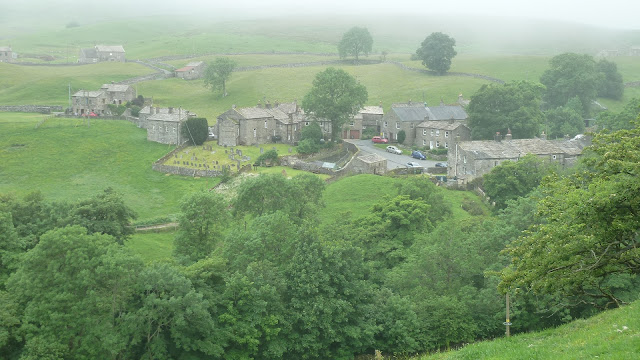 We bade Gordon and Rowan farewell and set off across the moor, ignoring any scare stories. The moor in bad weather would certainly be difficult to navigate, although there are white marker poles at intervals to help. As we yomped along following Frumming Beck, we could see the solo walker along the road ahead off to our right and we hadn’t been walking long when he suddenly stopped before turning off of the tarmac to cross rough ground towards the route proper. I remarked to Alan that it seemed odd he had been frightened off of an official route like the Pennine Way because of a story heard in a pub that warned of sinkholes but was prepared to risk crossing rough ground in the same area. Probably more by luck than judgement, he managed to safely negotiate the rough ground and intercepted us on the path. In fact, I suspected that he had looked back and seen us and decided that as we hadn’t come to any harm, it was safe for him to return to the route proper. Also, walking with others would give him the confidence to cope with any obstacles encountered on along the way. 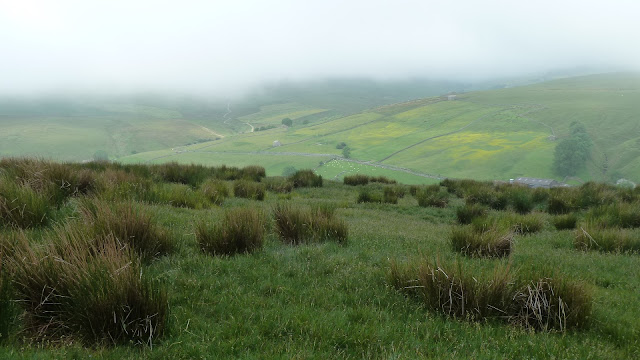 He introduced himself as Gordon and we chatted for a while as we walked and we were bemused by the fact that despite it being dry and quite warm, he was wearing full waterproofs, including leggings and gaiters, which must have made him very hot. It was after crossing the moor that the route crossed into County Durham and almost immediately, it became noticeable that the signposts became few and far between. At one point, as we climbed a low ridge, it became necessary to switch on the GPS to locate the path, which was no big deal but after the luxury of having plenty of signage to follow, I now had to keep checking the route more carefully to avoid straying. Gordon was fully equipped with map and map case, GPS and all of the route and waymarks written on the map, so it was quite amusing that virtually every route decision he made turned out to be incorrect.

After we had stopped for a break on God’s Bridge, a natural limestone crossing over the River Greta, Gordon set off in a completely different direction only to realise after a few yards that he had gone the wrong way whereupon he turned to follow us. This happened again just after crossing the A66 and it wasn’t long after this that we realised that Gordon walked much more slowly than us so we told him we were going to ‘crack on’ and soon left him behind. As he was only walking the one day from Tan Hill to Middleton in Teesdale, this being the one section he had missed when he walked the Pennine Way sometime earlier, he was in no rush but even so, it did feel slightly mean to carry on without him but trying to walk at someone else's pace is very tiring. As it happened, we never saw him again. We crossed Bowes Moor at a good pace and soon the reservoirs came into view ahead in the Baldersdale valley, which signified that we had reached the halfway point in the whole trek. Descending, we approached the road at Blackton Reservoir and as we stepped onto the road, Alan felt something ‘give’ in his knee and this incident was to change the whole walk for both of us. Alan had recently recovered from a knee ligament injury from exercising at the gym, which physiotherapy had repaired in time for the start of the trek. It now appeared that the problem had resurfaced. We hoped that he would be able to ‘walk it off’ and continued around the reservoir, passing Hannah’s Meadow, which had featured in a television documentary many years earlier telling the story of a woman living a very hard, lonely life in the area without the luxury of electricity or running water. We ploughed on over numerous ups and downs towards Lunedale and as we climbed onto Harter Fell, it became clear that Alan wasn’t going to walk off his injury as I could hear him wincing in pain as we climbed stiles and descended steep inclines. The prominent wooded hilltop of Kirkcarrion came into view, indicating that we were close to the town of Middleton in Teesdale, which came into view in the Tees Valley below.
The last two miles or so were slow progress as Alan struggled downhill trying not to put too much pressure on his injured knee and eventually he limped down to the road just outside the town, close to the campsite. After a short walk we reached the reception office only to find it closed, as was the bar, where Alan had hoped to get a drink as he had run out of water some time earlier and was quite dehydrated. After the midge ‘nightmare’ Alan had suffered the night before in Keld, I pointed out that as the River Tees ran close to the campsite, we would probably have the same problem with midges here. We sat on the seats outside the bar to deliberate our options and it was here that the whole walk changed as Alan announced that he would be unable to continue the following day with his injured knee. This meant that I would be walking on alone as I had decided before we had started that if for any reason Alan pulled out that I would continue with the walk. After a brief discussion, we decided to walk the short distance into town where at least Alan would be able to get something to drink and we could also look at the option of obtaining a room for the night.
As we reached the main road in the town, Alan crossed the road to a shop to buy a drink and I went to see if I could find a room. I called in at the most likely looking place but they only had double rooms, which they weren’t prepared to drop in price for single occupancy. This is a strange strategy I always think, when bearing in mind that it was late afternoon and the likelihood of anyone else coming along was very slim, so it would surely be better to be making some money than none at all if, as was likely, the rooms would stand empty for the night. I returned back to the street and found Alan limping along the road and we both went into a nearby hotel where we were pleased to find they had a twin room for a reasonable rate. The receptionist couldn’t have been more helpful and we were soon in the room making tea and watching Wimbledon on the television. We attended to the usual daily routines of showering and washing clothes but everything had now changed with my decision to continue on alone and a mixture of excitement and apprehension now dominated my thoughts. After we had finished attending to our various chores, we headed down into the hotel bar for dinner and enjoyed a good meal and a few beers, which would now be the last we would enjoy together on the trek.
at July 02, 2015