After an excellent night's sleep, I awoke to the luxury of an electric kettle to boil the water for my morning coffee and as all I had to eat for breakfast was some flapjack and I had no tent to pack away, I was ready in double quick time and slipped out of the slumbering village quietly after posting the bunkhouse key in the warden's letterbox. The guidebook says of the four mile section to Alston that 'this section may well get on your wick', but I found it a delightful stroll in the sunshine along the banks of the River South Tyne. The 'overgrown paths, numerous stiles and sprung gates' either failed to materialise or just didn't register with me as I ambled along enjoying the peace of the early morning riverside setting. It was along this section that it finally dawned on me that I had now left the Pennines for the last time and would be following the South Tyne Valley during today's hike to Hadrian's Wall. First, I had the short but enjoyable hike to Alston, which seemed to be over quickly and it wasn't long before I reached the road just outside the market town. I turned right into the town and headed for a cash-point before returning back along the road to the service station, which I had noticed had a fairly large shop attached to it. I was overjoyed to discover, as I stocked up with snacks and drinks for the day ahead, that it also sold hot food and purchased a hot bacon, sausage and egg roll for my breakfast.

I stumbled outside carrying my purchases and having stowed them safely in my rucksack, walked the short distance to the war memorial where I had noticed a bench. Here, I sat and enjoyed one of only a handful of hot breakfasts of the trip before shouldering the rucksack and heading off across fields and out of town. I passed the remains of Whitley Castle, an old Roman Fort, of which, all that remained were a few grassy ridges in the middle of a field. The information board suggested that it was 'the most complex defensive earthworks of any known fort in the Roman Empire, with multiple banks and ditches outside the usual stone ramparts. The fort appears to have been sited to control and protect lead mining in the area as well as to support the border defences of Hadrian's Wall'.

A short while later, as I followed a field edge, I noticed an elderly couple on the far side as they exited the field through a gate and headed off into trees in the direction I was following. Passing through the gate, I began descending through the trees and noticed a movement at the bottom of the path in the undergrowth to my right right and realised to my horror, that it was the old lady squatting by the side of the path in the bushes. I knew that if I took another step or two in her direction she would become aware of my presence but also, had I made any sudden move backwards, this would also probably alert her with all of the resulting embarrassment on both sides. I stood momentarily frozen to the spot before very slowly stepping backwards a couple of paces and side-stepping into the bushes. I waited a few moments before stepping back out onto the path to see the tops of the old couples heads disappearing through some extremely tall plants that covered the path in the next field. These resembled rhubarb plants and were indeed taller then me, so I was glad it was a dry day as, had I needed to push my way through in the wet, I would certainly have emerged soaking wet on the opposite side of the field.

I soon caught the old couple and had a pleasant chat with them, the old lady totally oblivious to our earlier 'close encounter' and as I left them, I reached the road just outside the unfortunately named village of Slaggyford. Here, like many before me, I abandoned the Pennine Way temporarily to follow the South Tyne Trail, which is the course of an old railway and apparently avoided some tricky navigation through houses at the quaintly named 'Merry Knowe'. The flat railway bed allowed me to maintain a good pace to Burnstones where I left the trail and picked up the Pennine Way once again. The next few miles were fairly unremarkable, this day being something of a 'transition day' between the Pennine Hills and Hadrian's Wall but despite the lack of drama in the scenery, the walking was pleasant and easy in remote countryside and I was enjoying the feeling of having neither a timetable nor any navigational issues to worry about for the time being. I reached Blenkinsopp Common, which the guidebook described as being 'boggy, and for some, among the worst sections of the PW' but I must have been lucky, as although it was a little rough and wet at times it was certainly nothing to worry about and I was soon passing by the summit of Black Hill, the second hill on the Pennine Way to bear the name. 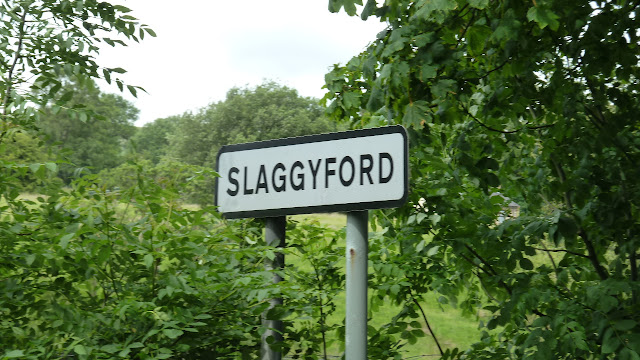 My mind drifted back to the summit of the first 'Black Hill' and the large gathering on the summit and I wondered what Alan was up to and how far Patrick was ahead of me as he forged his way towards John O'Groats. So much had happened in the intervening days of the walk since that gathering on the second day that it now seemed to have occurred on a different trip altogether. The Black Hill I was now passing wasn't anything like as sociable a summit as the previous one and had nothing to cause me to linger and it wasn't long before I was descending through fields and around a golf course to the road at Greenhead. Here, I crossed the road and headed for Holmhead Guesthouse and camping barn in the shadow of Thirlwall Castle and Hadrian's Wall. As I approached the gate to the guesthouse, a woman inside cleaning the windows saw me entering and promptly turned away and walked off, ignoring me. I walked up to the door and rang the bell whereupon she returned and opened the door. After enquiring if it was okay to camp, she directed me to a garden at the rear of the house and told me to wait for her husband, who soon appeared, told me where to pitch, pointed at the shower and toilet, relieved me of seven pounds and promptly disappeared. As I began unpacking my gear on the picnic table in the garden, I was joined by an attractive but surly looking young girl in very tight, very short, shorts and a top that probably revealed a little too much cleavage. I said hello as she sat at the table with a coffee but I got very little in response and it quickly became clear that I was 'in the way', so I moved my gear over to the garden wall where I pitched the tent and started organising myself for the night. The girl had now been joined by two others and Ms.Surly and one of her friends began playing badminton on the lawn and I had to frequently throw the shuttlecock back to them as it landed in among my camping gear with monotonous regularity. 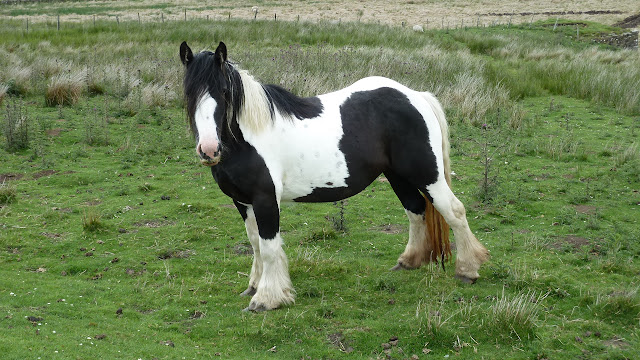 When I had finished setting up the tent, I escaped from the amateur badminton players by heading for the shower, which turned out to be something of a joke. Having entered and locked the door, I realised that 'the shower' was nothing more than a single toilet cubicle with a shower head fixed to the wall and a hole in the floor for the water to drain away. There was no space to get changed or to stow your clothes to stop them getting wet while you showered. The whole toilet cubicle would be soaked while you showered. I was confused, surely this wasn't right but after a while I realised that this indeed was 'the shower'. I looked at the 'interesting' pipework supplying water to the shower and taking the shower head out of it's holder and aiming it into the sink bolted onto the wall underneath, switched on to check out how hot it was. Well, it wasn't! It was cold! I decided that there was no way I was going to shower in cold water standing in a toilet cubicle, so I had a wash in the tiny sink and changed my clothes. When I emerged, Rowan and Gordon had arrived and begun setting up the tent and I appraised them of the shower situation. Ms.Surly was now posing by laying stretched out on the lawn, practising for her next photo-shoot before realising that no-one was taking any notice of her and flouncing off into the bunkhouse. Later, I headed into the village to the Greenhead Hotel for dinner where I met up with Tony for the first time since leaving him on the Corpse Road below Cross Fell. He joined me for dinner and I discovered that he was a sports reporter for a local newspaper and also heavily involved with Oldham Athletic football club where, among other things, he wrote items for their programme. He turned out to be a really nice guy and I enjoyed his company as we ate. Later, we were joined by Rowan and Gordon and had a pleasant evening before we headed back to the 'campsite' leaving Tony to cross the road to the hostel where he was staying.