I arose early and as I finished packing my rucksack, Tony appeared walking up the lane past the house and waited for me to strap on my pack. We set off uphill together for a short distance before I began pulling away from him as the hills steepened. The Pennine Way followed Hadrian's Wall for around eight miles on today's section and I knew that it was going to be a fairly tough start as the route along this iconic Roman landmark followed the hilltops and rose and fell like a roller-coaster along most of the Pennine Way stretch. The weather was fine and sunny, although there was a chill in the air and it felt as though rain was not too far away. I was feeling really good as I headed onto Walltown Crags with the sun sparkling on the lake at Walltown Quarry.


I climbed the first of many steep 'pulls' up onto the wall and I took a moment to stop and look behind me to the south towards the now distant Pennines. Later in the day, I would look north and see the final hurdle of the Cheviot Hills appear as just a grey line in the distance. Today was to prove different, at least initially, as for the first time since the Yorkshire Dales, there were numerous walkers in evidence as the Hadrian's Wall trail is a very popular long distance trail and I felt slightly uncomfortable sharing the path with so many other walkers for the first time in a number of days. At Burnhead, a walker leaving a guest house asked me if I had seen a map along the trail that he had dropped while walking the previous day, I said I hadn't and wished him a 'good walk' and carried on up a steep climb to the remains of milecastle 42. The Romans built turrets, or milecastles, at intervals of one mile along Hadrian's Wall and larger forts at other intervals along it's length. The wall was five metres high with a defensive ditch called 'The Vallum' set between two mounds of earth running along the length of the southern side. The wall took ten years to build and was in use for two hundred years. After the Roman's departed, the wall fell into disuse and the stones were gradually plundered and used to build farms and roads. Thirlwall Castle, which stood above the campsite I had stayed at the previous evening was built using stone from the wall. 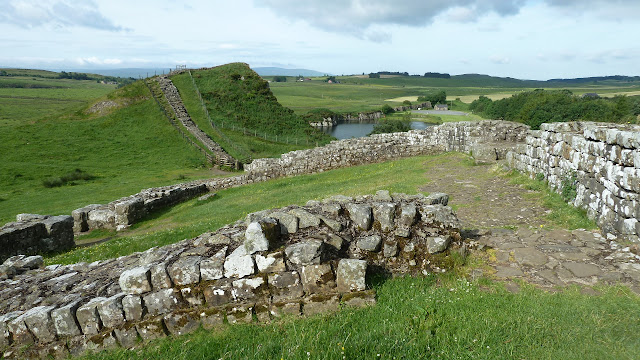 Today, the National Trust, English Heritage and the National Park authorities preserve what remains of the wall. It was while climbing one of the numerous steep inclines from Steel Rigg car park that I noticed a sharp pain in the top of my left foot from my ankle leading into my big toe as well as a slight soreness at the back of the heel on the same foot. I had walked the many miles of the Pennine Way in my trail shoes so far without a hint of foot trouble, so was surprised to now find that I had a problem. As the path descended, I found a comfortable rock to sit on and removed my shoes to find a very small blister developing at the back of my left heel. My socks were slightly wet so I took both of them off and retrieved a dry pair from my rucksack while waiting for my feet to dry thoroughly. This done, I took out a medium sized Compeed plaster from my first-aid kit and warmed it thoroughly in the palms of my hand and moulded it around my heel with my palm until it became almost impossible to distinguish where my foot ended and the plaster began. The pain across the top of my foot felt like a tendon problem, so I swallowed some Ibuprofen tablets and put my shoes back on before heading off up the next steep climb. It took a while for the tablets to take effect but once they did, I took one tablet each morning for the rest of the walk before setting off and had no further problems with either the pain or the blister.


I was now approaching Crag Lough, which signalled that my trip along the wall was coming to an end and as I marched along at a fair pace, I met a couple walking in the opposite direction whereupon the male half of the pair greeted me with a 'Hola, que tal?'. His surprise, and particularly that of his partner, who burst out laughing when I responded with 'Muy bien gracias, y tu?', was total. Presumably, I was the only walker that morning to reply to him in his own language. I forged onto Hotbank Crags, the last climb along the wall before descending to Rapishaw Gap, where I crossed the wall and left it as the Pennine Way now headed for Wark Forest. I stopped in the gap between the wall and the forest to look back at the Whin Sill, the escarpment of dolerite that the wall sits on top of and tried to imagine what it must have been like for the Roman soldiers garrisoned here in the wild outpost and even more pertinent, for the tribes approaching from the north. I followed a wide track along the boundary of the forest for a short distance before leaving it for a narrow, grassy and boggy path into the woods. This was a completely new experience along the Pennine Way, as so far, the way had only briefly courted any woodland.


The Wark Forest is a plantation that many criticize for the uniformity of planting and the strange 'dead' atmosphere that usually pervades such plantations but I found the sudden change a novelty and the way tended to avoid the wide forest roads for more interesting, abeit 'swampy' trails, through the trees. It wasn't long before I was out in the open again crossing Haughton Common and after another forest section I found myself standing at the edge of a river with no obvious way across. I looked up and downstream but could see no sign of a bridge. Checking the map in my guidebook, I could see no mention of this unbridged crossing so in frustration, I simply waded across. Having wet feet was no big deal but it seemed odd that a National Trail would have a river crossing with no bridge. I later found out from another walker that there was indeed a bridge further along the bank of the river.


I crossed farmland to the unlikely named Shitlington Crags where I had to fend off the unthreatening but boisterous attentions of two dogs that had bounded away from their owner, who came puffing her way along the track running parallel to the crags, loudly calling for her dogs to return. By the time she reached them I was already on top of the crags and heading for the path that descended steeply through fields to the road just outside Bellingham. I followed the road to the village campsite but there didn't appear to be anyone to book in with, just a sign asking for campers to call into the cottage across the road, which I did, but annoyingly, there was another sign on the door saying that the owners were out and would be back at five o'clock. I was in two minds if I should set up the tent anyway or look for a room, and after wandering around the village for a short time, called at a guesthouse where the owner asked for an exorbitant sum for a double room. When I baulked at the amount and said I would try elsewhere, the owner laughingly replied that she 'would not be offended' by my doing so. I walked around the corner and found a room for half the price and enjoyed a wonderful stay, the owners were two of the friendliest, most helpful I met on the entire journey and accused the other guesthouse owner of being 'greedy'. Later, having used far too much hot water cleaning myself and my gear, I walked down the road to the hotel for dinner and once again, had another convivial evening with Tony, Rowan and Gordon.