On the morning after my arrival at Jamaica Inn, I realised that I needed medical advice as my big toe on my left foot was swollen and  painful with an unpleasant looking discharge. Having sought advice, I spent three days in Launceston receiving treatment from the hospital for an infected toe. On the Tuesday, the fourth day since my arrival, I was returned to Jamaica Inn by John, proprietor of the beautiful St. Dominick Guesthouse in Launceston. I had stayed with him and his wife Suzanne for the three days and they couldn't have been more friendly and helpful. It was quite a wrench when it came time to say goodbye. After a short drive, I waved John off from outside of the Jamaica Inn and it wasn't long before I was swearing yet again at the Lands End Trail and regretting leaving the SWCP. I spent a frustrating hour losing the path and regaining it before eventually emerging onto open moorland and dropping downhill  to join a narrow tarmac road. Once again, my lack of faith in the Lands End Trail caused me to stick with the lanes, some of which were no more than tracks with occasional paved sections. The day turned into a long hot slog and I arrived at the campsite at the unlikely named village of  Chipshop. Despite being quite tired, I almost turned and left when receptionist asked for £27 for my tiny one man tent. 'All the pitches  are the same size and they all have electricity' she explained. Reluctantly, I paid up and pitched my tiny one man pyramid tent among the "glampers' tents and motorhomes
Jamaica Inn to  Chipshop 36k - Cumulative 241k

I left Newquay on another fabulous, sunny morning and set off along the SWCP to Padstow. I had the beginnings of a small blister on the ball of my left foot and had taken a rest day in Newquay in the hope that this would stop it developing into anything worse. As I progressed along the coast, I was becoming amazed at the sheer amount of stunning sandy beaches and coves I encountered as around each headland, another superb beach would be revealed. Unlike the rough, rugged section of the SWCP from Lands End to St.Ives, this section was much easier as it followed the tops of the cliffs, which made for easy, rolling downland type walking. Eventually, I left the path and followed a number of country lanes and paths into Padstow to avoid the long detour around Trevose Head. After pitching my tent at the Dennis Hill campsite, I headed into Padstow in search of dinner and passed the queues waiting in line for Rick Stein's fish restaurant. I found a pub by the harbour and as I ate my dinner, marvelled at how people could afford  £4.70 for a pint of fairly standard  lager. My foot was by now becoming quite painful and when I returned to my tent, I replaced the plaster on the ball of my foot but my big toe was now also becoming painfully swollen.
Newquay to Padstow 29.2k - Cumulative 154.2k 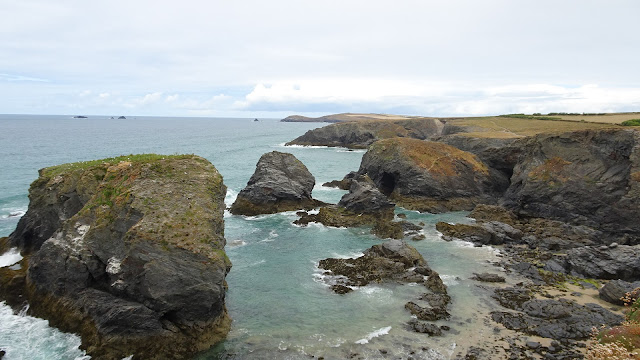 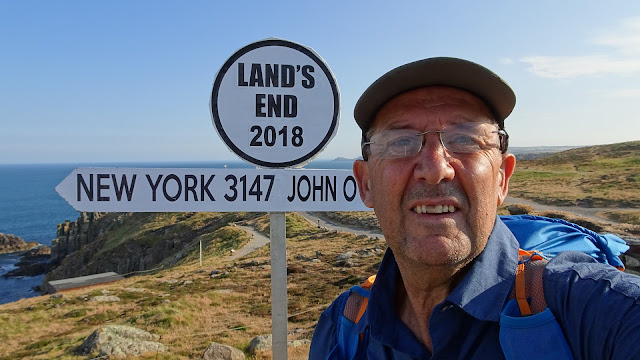 Having spent the previous night in the pub watching England getting knocked out of the World Cup with two German tourists, I woke early on the campsite in Sennen and headed for Lands End. I took my obligatory selfie by the signpost and set off along the coast for Sennen Cove. It was a beautiful sunny morning as I arrived at the stunning beaches but it was too early for breakfast as the beach cafes were only just opening, so I carried on and eventually turned inland to the village of St.Just where I found a cafe and had breakfast sitting at the side of the road. Returning to the coast path I followed it for many miles as it rose and fell, like a white knuckle ride but without the assistance of a train and with plenty of rocks and boulders thrown on the track for good measure. The plan was to follow this as far as Carbis Bay before heading inland and picking up the Lands End Trail. I reached the village of Zennor in the late afternoon and stopped briefly at the pub for a beer but soon pushed on as I had to find somewhere to pitch the tent because of a lack of campsites in the area. The coastal path continued to be very narrow and steep and by seven o'clock I was becoming a little concerned that I may not find anywhere  to camp when I suddenly came across a small patch of reasonably flat grass by the side of the path. I immediately pulled the tent from the rucksack and made camp and enjoyed one of the best views I have ever had while wild camping. After eating, I drifted off to sleep to the soothing sound of the waves crashing on the rocks.
Over the next three days, I drifted between the coast path and the Lands End Trail but it soon became clear that this 'trail' was going to be time consuming and frustrating as the paths either disappeared and left you standing in a field with no obvious way out or were ridiculously overgrown. After one particular path, where I spent too much time trying to force my way through using my trekking poles, I gave up on the trail and reverted to the coast path. I have also been using country lanes as short cuts where the coast path takes lengthy detours around headlands. I am currently having a rest day in Newquay where I am staying in a hotel. I have covered 125 kilometres in the first four days, which I think would have been more had I not wasted time on the Lands End Trail.

With only a week to go until I start my LEJOG hike, I am checking and re-checking everything in readiness for the trip. The main issue other than gear concerns, is the weather in the UK, which recently has been more like that of my home island of Tenerife. With the forecast looking set for more hot weather for the foreseeable future, I have found myself questioning my strategy for re-supplying with water. When hiking in the UK, because of the weight involved, I rarely carry more than a litre and this time I am planning to carry only around 850ml. I back this up by using a Sawyer mini water filter, which is able to filter dirty water making it very easy to pick-up from streams etc. along the way. I am becoming slightly concerned that streams and rivers may be drying up if there is no rainfall in the near future so I may end up carrying more, at least in the early part of the walk. I always used to hike with a minimum of two litres of water but since becoming more weight conscious and reducing my pack weight, I decided that the 50 gram weight of the Sawyer was preferable to the 1 kilo a litre of the water. 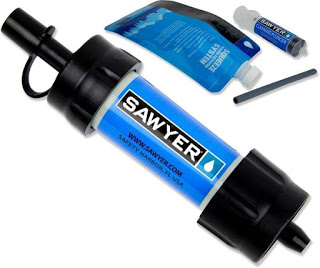